The Freedom From Religion Foundation on Thursday said it wants four Georgia public school teachers involved in an impromptu “prayer rally” to be permanently removed from duty, and approximately 50 student participants disciplined.

The prayer rally began in a coach’s office at Lumpkin County High School at about 7:30 AM on May 1, according to media reports. One student claimed that “between 12 and 15 fellow students turned their lives over to Christ during the prayer.”

FFRF Staff Attorney Andrew Seidel wrote the letter to Superintendent Dewey Moye of the Lumpkin County School System in Dahlonega, GA, after Moye publicly stated that there would be no “consequences for any employee or any student” involved. FFRF told Moye that such leniency shows unconstitutional favoritism to religion and that it will “encourage participants to repeat the crime.”

“We understand that you have assured the media that this will not happen again. We appreciate your commitment to upholding the Establishment Clause,” Seidel wrote in the Thursday letter. “However, we fear that the district does not fully comprehend the severity of this violation and the extent of religious encroachment in Lumpkin County public schools.”

Wisconsin-based FFRF is a nonprofit organization dedicated to protecting the constitutional principle of separation between state and church.

FFRF said it’s not seeking to have people punished for exercising religious faith, but instead it asks that the teachers who left classrooms unattended and students who skipped class to be disciplined.

FFRF also pointed out the complicity of the principal.

“Either he knew this was happening and didn’t stop it or he did not know that a significant portion of his charges and employees were violating the Constitution, state law and school rules,” the letter says. “Each is a serious dereliction of duty.”

FFRF said several new concerns about the unconstitutional encroachment of religion in Lumpkin County Schools indicate that the illegal prayer episode was foreseeable and that it has received multiple allegations of the highly religious nature of high school athletic programs, including coaches subjecting students to their personal religious beliefs and pressuring them about religion at games, practices or in classes they teach.

Seidel wrote, “We have been told that during practices, coaches ask students why they did not go to church. FFRF also received an allegation that “Kids were forced to wear team shirts saying something akin to ‘God, Family, School, Basketball.’”

“”Perhaps this is why students thought it acceptable to skip class in violation of the Georgia compulsory attendance law,” Seidel added. 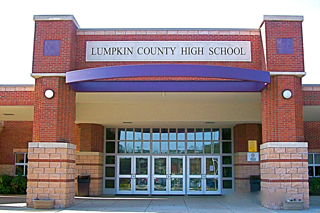