Fun in the Philippines

Fun in the Philippines

MANILA, Philippines — I recently traveled more than 7,000 miles across the Pacific Ocean to an island country in Southeast Asia. The thousands of islands that make up the Philippines were beautiful, but I didn’t come to enjoy the view: I was invited to speak at the Philippine Atheists and Agnostics Society’s second annual convention.

The conference began on Sunday, May 31, in the morning. I arrived in Manila the night before after 24 hours of flights and a layover in Tokyo, so I was understandably in need of rest. This wasn’t just my first trip to the Philippines – it was also my first time leaving the country – so I clearly underestimated the difficulty of the flights or overestimated my ability to deal with them.

In any case, despite the fact that I was jet lagged and running on almost no sleep, I woke up when it was time to see the speakers give their presentations.

The PATAS organizers did a great job of finding speakers to give beneficial and interesting talks at the event. I hadn’t heard of many of the other speakers, but that is part of what I liked about it. I was able to meet new people and even be introduced to some new ideas.

One of my favorite speakers was Red Dela Dingco Tani of Filipino Freethinkers. He shared advice for atheists who recently adopted the position and counseled them against burning churches and “slapping priests.” Considering these were real world examples of atheist fundamentalism and potential violence, and not merely abstract possibilities, I greatly appreciated this part of his talk. 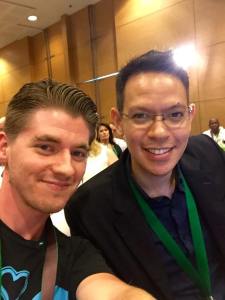 A conference selfie with Red Tani.

I also especially enjoyed the presentation by Professor Eric Manalastas, a psychologist specializing in LGBT psychology who discussed social stigmas related to sexual minorities, and the talk by Rodion Herrera. Herrera, the Head Astronomy Lecturer at Voyager, talked about the importance of scientific literacy around the world by telling his own autobiographical tale.

I was scheduled to speak second-to-last, so I had the benefit of seeing everyone’s presentations first. I spoke about my background and on why, how, and when to educate children about religion. There should be a video released in the near future, after which I’ll update my Facebook and this page. 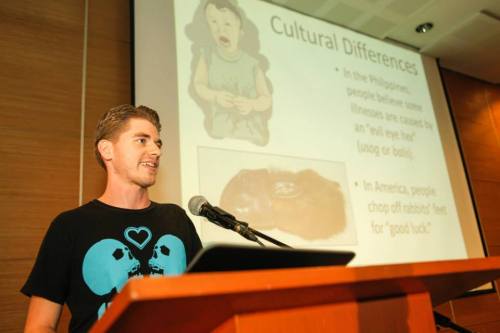 I was impressed with a lot of things in the Philippines (not the traffic or the food), but what set this trip apart for me was simple: the people. Every person I spoke with was friendly and understanding. They were cheerful and polite and made me feel incredibly welcome.

I arrived back in Los Angeles on Monday morning, rounding out the busiest weekend of my life, but I still can’t stop thinking about the kindness and generosity of the PATAS members and other conference attendees who made me feel like part of the family. 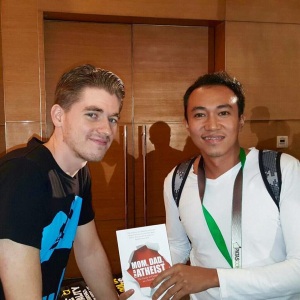 One of the great people I met!

One of the great people I met!

Now that I’m back home, I’m going to relax a little before my next event. For that trip, I’ll be heading to San Antonio, Texas!

*** If you want to book me for a speaking engagement, please don’t hesitate to e-mail me at David@DavidGMcAfee.com.

One response to “Fun in the Philippines”